If an actor performs a monologue but no-one’s watching, did it really happen…?

Morning! No, it’s afternoon… and I think it’s a Sunday. I hope so because Sunday’s a bath day and… well, let’s just be grateful for that.

General routine for me so far:

Now sure, I may be being overdramatic for the sake of High Art. Laziness, however, is a natural state for me and so many others, and keeping your own focus, productivity and drive in these circumstances is hard. Really fucking hard. Especially when your go-to boredom plaster is the ‘Social Media’. Suddenly, we’re seeing a 24-hour stream of people providing content, laughter and, inexplicably, WORK opportunities… some of it’s even good too! There are just some people seem to be able to grab any situation and find a way to exploit it.

When I first heard we were closing, I panicked. Not just because I was going to be unemployed (again) and had only really begun making money, but because I was thrown out of the pale limelight just as it was finding its focus. I’d thrown too many eggs into my Million Dollar basket and now what was I gonna do? I had so many ideas, investments and leftover copies of my first EP to sell (Still available, I’ll give you a great price) that I had resting on this show’s shoulders and felt like the liferaft has started sinking. Poor poor me, right? 🙄

Well, three weeks into this new world order and here’s where I’m at.

I feel exhausted. There’s actually just too much to worry about and deal with. There is no rhyme or reason to this. The rulebook, as they say, hasn’t been written… everyone’s trying to write their own, and ‘staying relevant’ for me has gradually become an unrealistic ‘goal’ to maintain.

It’s gone from ‘come on folks look at all this time and energy we’re gonna have, use it for yourself. Grow, learn and bloom’ to ‘eh, excuse me, everyone, stop telling everyone they should be using their time to grow learn and be productive as it’s making every one of us who aren’t (me) feel fucking awful’ through to ‘Look how bloody lazy I am today, what day is it, day 4857594648 who cares, here’s a video of my dog riding a broom’ (great vid btw) and to be honest… right now, I’m okay with that.

“The individual has always had to struggle to keep from being overwhelmed by the tribe. If you try it, you will be lonely often, and sometimes frightened. But no price is too high to pay for the privilege of owning yourself” – Friedrich Nietzsche

The dust has settled, the heat is fading and the chaos is being organised. People in our line of work have accepted our fates and learned to cope and, hopefully, resist the feelings of inadequacy or irrelevance we (I) felt.

Some people are making the most of this situation for themselves. That’s really fucking awesome, we do have time, and if you can thrive in it, go for it – sadly, not everyone can and that’s okay too.

Some people don’t want to expose their entire life for the sake of entertainment and potential derision of others. That’s okay.

Some people have had to get work in any place they can find it, and I commend them for that; ‘woe betide you’ should you be thrilled to announce it, however.

Thankfully, as of yet, there isn’t a right way to act in this situation.

This is a song that I wrote and have, in a potential misguided move, decided to upload online.
Check it out on my insta https://t.co/7ck0GoL9Rp
Or Facebook: robbiedurhammusic
Get it roond yi! pic.twitter.com/fZa6solfhh

It’s hard to keep ‘on-show’ constantly, and people can tell, they will tune out the more it’s thrust down their gullets.

So… here’s my personal ‘epiphany’. Why not, in real life AND social media life, whatever you do, only do it because you want to. WOAH! Bet you’d never thought of that ‘pearl of wisdom’.

I mean, that is the point of ‘Art’, isn’t it? Expressing your inner-feelings somehow and allowing other people to express theirs back. Art stops being ‘yours’ as soon as you give it to the public so just make sure you’re proud and what you do is genuine.

I, for one, am scared of words like ‘genuine’ and ‘authentic’ because they have so much baggage. Being ‘authentic’ and ‘true’ and ‘real’ carries a lot of weight. So, I suppose what I’m learning from all this is, if I’m gonna do something and expose myself (behave) for other people, then I need to be honest. Do what I’m doing for me, so that if other people don’t care and it only gets 50 likes when you’re used to 500… It doesn’t matter. It feels stupid writing that as it should go without saying.

So… I’m learning to do things for myself again, things I’d sadly forgotten how to do, be it music/exercise/laughing. For example, the theme of this blog probably isn’t news to anyone, but I’m getting my thoughts out in a way I didn’t know I could and it helps, a lot, and if it resonates with even one other person, and that person ‘gets it’, then that’s an awesome bonus, but… it’s mainly for me. Nom nom, tasty self-indulgence.

Anyway, it feels like people are learning to live outside of Social Media slightly… do you think? Now it’s become so over-saturated (not that it wasn’t), people are literally tuning out the stuff that doesn’t interest them. Ultimately, this is probably a good thing?

ALTHOUGH, by the same token, if people are providing content and making an effort to entertain or feel acknowledged, support them if you can. It does you no harm and a ‘like’ can mean a lot from a friend or peer (I STILL NEED SOME APPROVAL) and it only takes a milli-second.

My overthinking is learning to take a backseat as there’s just too much to overthink about. I’m as relevant as I need to be, to my family, my friends and people who have supported me along the way. I’m learning that being happy in my immediate self is way more important. The future’s not finite. Yet. And if my music/benign chatter/stupid face brings something to someone somewhere then wonderful, if not… like it anyway, thanks.

“But I kept it to myself – maybe because I didn’t think it mattered, but probably because, in a place where everyone knew my story, it was nice to know there was a chapter that only I had read” Ally Carter, I’d Tell You I Love You, But Then I’d Have to Kill You

Robbie Durham is an actor/musician from the Scottish Borders, who now lives in London. Trained at Arts Educational School London, Robbie has performed in the West End, UK and international tours. His recent credits include Million Dollar Quartet, High Fidelity and Sunny Afternoon. He also writes his own music, performs solo and with his sister who is also an actor/musician. He plays guitar, piano, bass and (a very little) drums. You can also #GetSocial with Robbie on our sister site StageFaves.com. 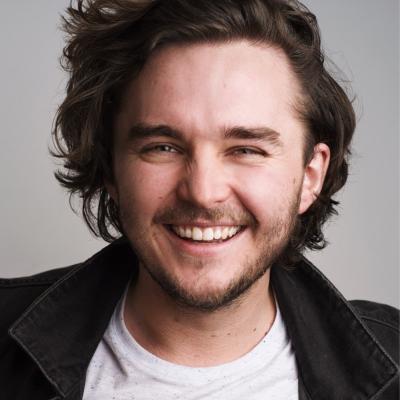 Robbie Durham is an actor/musician from the Scottish Borders, who now lives in London. Trained at Arts Educational School London, Robbie has performed in the West End, UK and international tours. His recent credits include Million Dollar Quartet, High Fidelity and Sunny Afternoon. He also writes his own music, performs solo and with his sister who is also an actor/musician. He plays guitar, piano, bass and (a very little) drums. You can also #GetSocial with Robbie on our sister site StageFaves.com.