Ophelia Rewound is an exhilarating piece of live art, a cross between installation and theatre, an interactive rumination on the nature of love.

We meet Ophelia at what seems to be the end of her life. We can see her distress as she undresses in ‘front’ of a CGI mirror. Hair brushed, and down to underwear, she opens a large container of water and attempts to drown herself. A clock is ticking two minutes.

Thankfully, she emerges, soaked, the floor awash with water, before we get to the deadline. Ophelia’s heart does not beat, it ticks. Like a clock. Her day is a series of life-saving two-minutes bursts. Across fifty minutes we live through, and contribute to, those bursts, each taking us further into Ophelia’s grief and preoccupations.

What works so brilliantly about Antigoni Spanou’s production – she writes, directs, and stars as Ophelia – is her ability to connect with the audience. Right from the start, we know who she is and how she feels, and because of that we become complicit in changing her fortunes.

On the night I went, there was a glorious piece of audience participation thanks to a sympathetic and charming bearded man who played his part elegantly. I suspect it got everyone thinking. It says a lot for Spanou that she can create intimacy both with the individual, and with a collective of viewers. Joseph Thorpe’s imaginatively tailored projection mapping adds a whole new dimension.

It is interesting that Camden People’s Theatre is running two, unconnected, shorts each evening, both exploring issues around women and the grief many experience when love goes wrong. With Ophelia Rewound, we don’t need to know the story of Shakespeare’s heroine to recognise an exploration of the psyche. With Antonia Georgieva’s play for Aslant Theatre, MUSE, however, a level of context at the beginning of the piece would make all the difference as it is a close examination of the tension between artist, Pablo Picasso, and muse, Dora Maar.

Maar was and is a celebrated photographer and artist in her own right. The play is about her years with Picasso, inspiring his Cubist period and some of his best-known works. Like her predecessors, Maar was embraced, posed, painted, and then rejected by the artist. That is underscored in this production which is directed and lit like a series of photographs. Cara Evans’ set and costumes are a delight. The terrific ensemble cast – Denitza Zafirova, Jahmai Masai, Zoe Lambrakis, Sarah Kentish, Harry Kingscott and Claire-Monique Martin – is tight, and well-choreographed by movement director Mandy Gordon.

Where MUSE falls down a little, despite some excellent exchanges between artist and muse, is that the writer can’t decide where to put the emphasis – on Maar or on Picasso – and, by being even-handed, there isn’t enough of either for us to bite on. Instead of the intellectual and sexual tension being played against each other, the discourse trumps the intercourse. Nonetheless, there is enough good writing and direction to mark Georgieva as one to watch.

Shyama Perera is a novelist and broadcaster. She has been a judge on both the Olivier Awards panel and their Affiliate Awards panel. She ran the Monkey Matters Theatre Reviews website for six years and reviewed for local papers and BBC London before realising it’s much more fun being part of a lively team. She is delighted to be one of My Theatre Mates. 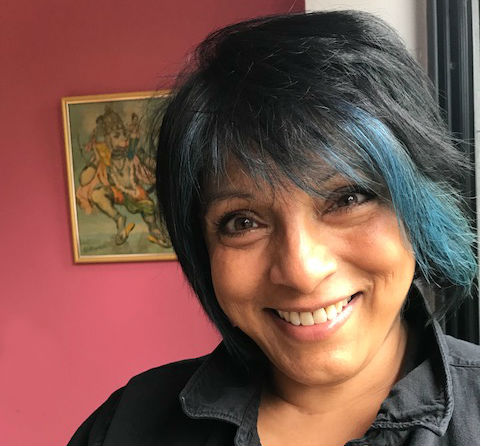 Shyama Perera is a novelist and broadcaster. She has been a judge on both the Olivier Awards panel and their Affiliate Awards panel. She ran the Monkey Matters Theatre Reviews website for six years and reviewed for local papers and BBC London before realising it’s much more fun being part of a lively team. She is delighted to be one of My Theatre Mates.