I started off as a stand-up comedian having grown up as a kid always wanting to be a stage actor and when the opportunity to do actual stage acting arose, I couldn’t quite believe it.

The Wind in the Willows is a perfectly fun, family show. It’s not a theatrical masterpiece but it’s a cute, heartwarming fable that’s sweet enough for both children and adults to enjoy.

Wind In the Willows is one of my favourite childhood stories and a refreshingly new musical take on the story hasn’t gone amiss. so thanks to Julian Fellowes, George Stiles and Anthony Drewe there’s a spanking brand new musical at the London Palladium and it’s simply sensational.

Following the antics of Mr Toad of Toad Hall, The Wind in the Willows is a story about friendship and loyalty – seeing Rat, Mole and Badger standing with the boisterous Toad despite everything he does and all his crazes including motorcars.

Fresh from Half a Sixpence, Charlie Stemp will join Elaine Paige and Gary Wilmot, along with the previously announced Julian Clary, Paul Zerdin and Nigel Havers in Dick Whittington, this year’s Christmas pantomime at the London Palladium.

Previewing at the London Palladium from the 16th June before officially opening on the 29th June, The Wind in the Willows is a brand new musical featuring music by George Stiles and lyrics by Anthony Drewe as well as a book by Julian Fellowes.

Looking to introduce your children to the world of theatre? Here’s a few productions around now and coming soon in London.

The plot fuses a caper like Dirty Rotten Scoundrels with Indecent Proposal where mobster types hijack the love story of Jack and Betsy by offering her a weekend in Hawaii to pay off his gambling debt. Betsy escapes the hoods disguised as a showgirl, Jack has pursued her in a troupe of skydiving Elvis impersonators.

the London Musical Theatre Orchestra has announced its first shows for 2017: Jason Robert Brown’s Honeymoon in Vegas and Sondheim’s Candide.

As pantomime returns to the London Palladium with another all star cast including Lee Mead, Natasha J. Barnes and Paul O’Grady find out what critics have been saying about the biggest pantomime of the year… Radio Times: **** “To describe […]

The year is rapidly coming to a close. But before it does, there are more great shows to see in the lead up to Christmas. Here is Love London Love Culture’s guide to some of the best shows opening in December 2016

It has been confirmed that the musical adaptation of The Wind in the Willows, currently running at The Lowry in Salford as part of its UK tour, will transfer to the London Palladium in the summer of 2017.

Strictly speaking it should have been billed as “Ramin Karimloo and Broadgrass at the London Palladium” – then we might have anticipated the support act and late arrival of the West End and Broadway star known especially for having journeyed through pretty much every principal role in The Phantom of the Opera (and, of course, its sequel Love Never Dies) and Les Miserables.

Following a huge hiccup with regards to ticket collection and consequently a late running show, this world premiere concert of the new musical – in a one-off performance at the West End’s London Palladium on 29 June 2016 – was delightful, bizarre and completely unique.

Sir Bruce Forsyth, one of the UK’s best loved stars and entertainers, is today announced as the host who will interview American showbiz legend Liza Minnelli on stage in the West End in An Evening With Liza Minnelli. Sir Bruce said: “I am absolutely delighted to be spending an evening in the company of one of the truly great entertainers …

Beverley Knight is to star in Andrew Lloyd Webber’s record-breaking musical Cats to play the role of Grizabella. Returning to the London Palladium from 23 October 2015, Lloyd Webber’s record breaking Cats will run for a ten-week season until 2 January 2016. Tickets are from £20 with top price seats at £59.50 and children’s tickets at half price for Monday …

At nearly every musical, after the cast have taken their final bow and as the audience start filing out onto the street, the band will typically play a minute or so of exit music, almost the opposite of an overture, before they too sign off for the night.

I try to make a point of staying in the auditorium until that number is over, by which time often more than half the crowd will have left, so as to applaud the band (and at that moment in time, only the band) for the usually top-notch contribution that they will have made to the evening’s entertainment.

A good musical production is akin to a three-legged stool. The cast, the creative team and the orchestra make it a success and if you take away any one of those legs, the show flounders.

So I was delighted when, on having mentioned to my friend Anthony Gabriele, currently the musical director (MD) of Cats at the London Palladium, of my curiosity to see inside the orchestra pit during a big West End show, that he graciously invited me to sit in for a performance. 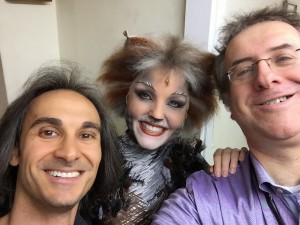 Meeting me at the stage door, he showed me down to the pit and as we made our way through the clowder of feline-costumed actors having their radio mikes checked, I felt suitably humiliated surrounded by such talented and athletic performers each of whom could probably summon up more fitness in their little finger than I could muster at all!

A good musical production is akin to a three-legged stool. The cast, the creative team and the orchestra make it a success and if you take away any one of those legs, the show flounders. Traditionally, a show’s pit is located sunken and to the front of the stage, where the conductor’s head and whirling baton is just visible to the audience, allowing him eye contact with both stage and band.

The staging of Cats is such that there is no room for such a luxurious, standard location and instead the musicians are located completely out of sight beneath the stage in a virtual musical dungeon. TV monitors allow Gabriele to see the action up top, whilst the usual screens fixed to the front of the dress circle (carefully located out of audience sightlines) allow the performers to clock the conductor.

Like a train formed of an engine and its carriages (and for that read the orchestra and the cast – and I daren’t say as to who is the engine!), it is the MD who not only drives the train but, more importantly, couples those units into one. He or she must be strong enough to hold the train together, yet flexible enough to allow bumps along the track to be absorbed into a smooth journey that neither derails nor delays the train and which, 99 times out of a hundred, will not even be noticed by the paying passengers enjoying the journey.

It takes an MD of considerable talent to connect with performers located elsewhere in the building, but the youthful Gabriele is amongst the very best of the bunch. The man knows Lloyd Webber’s show intimately, along with many more shows besides. Indeed, during the interval, he was helping Joseph Poulton (Mistoffelees in Cats) with the tongue-twisting Zulu lyrics from The Lion King‘s “Circle of Life” opener, before the actor transfers there when Cats closes at the end of April. Gabriele has MD’d that show too….

Which show had the Best Musical Direction in 2014?

The Also Recognised Awards are the first UK theatre awards to give a prize for Musical Direction. The shortlists have been drawn up by the Mates, with Mike Dixon and Andrew Keates. Who will win? You're the judge. Voting closes at midnight on Sunday 19 April 2015.

Continuing our feature series educating audiences on the importance of musical directors, critic and blogger Jonathan Baz spends an evening with Cats‘ MD Anthony Gabriele in the orchestra pit at the London Palladium.

I’m excited to attend the gala opening tonight of Michael Flatley’s revamped Lord of the Dance: Dangerous Games. I got a sneak peek recently when a few extracts were performed at a preview event at the London Palladium. In addition to the pounding Irish dancing – performed by a 40-strong company of world champions – […]